Mullingar Town Park (Irish: Páirc Bhaile an Mhuilinn Chearr) is a public park located in Mullingar, Co. Westmeath, Ireland. The park includes a wide variety of playgrounds, a swimming pool and a large pond near the centre. On July 22, 2016, the park became one of 22 public spaces in Ireland to be awarded a Green Flag.

On 21 August 2016, it was announced that there would be high-speed WiFi available throughout the park, ready to use by the end of August 2016. Local councillor, Andrew Duncan hopes that the idea will encourage more people to use the already popular amenity.

“I think that the park is under utilised. I think that young people, in particular, who want to use free WiFi shouldn’t have to depend on going to McDonald’s or other venues. The park isn’t utilised enough and should be developed more. It’s a wonderful amenity and we’ve got to get more people in there, this is one way to do it. If young people are going to be on their phones or their iPads, it’s better they’re doing in it the park than being stuck on their sofas.” 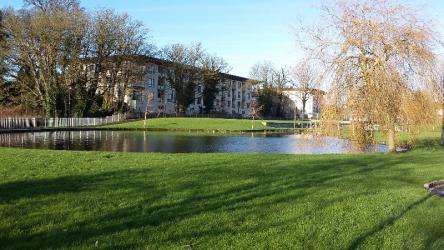