What to do in Mullingar

Belvedere House and Gardens is a country house located approximately 8 kilometres (5 mi) from Mullingar, County Westmeath in Ireland on the north-east shore of Lough Ennell. It was built in 1740 as a hunting lodge for Robert Rochfort, 1st Earl of Belvedere by architect Richard Cassels, one of Ireland’s foremost Palladian architects. Belvedere House, although not very large, is architecturally significant because of its Diocletian windows and dramatic nineteenth-century terracing. When Robert Rochfort decided to use Belvedere as his principal residence, he employed Barthelemij Cramillion who was a French Stuccadore, to execute the Rococo plasterwork ceilings which are among the most exquisite in the country. The landscaped demesne boasts the largest and most spectacular folly in the country, The Jealous Wall, built to block off the view of his estranged brother’s house nearby. There is also Victorian walled garden and many hectares of forest. The house has been fully restored and the grounds are well maintained, attracting some 160,000 visitors annually. 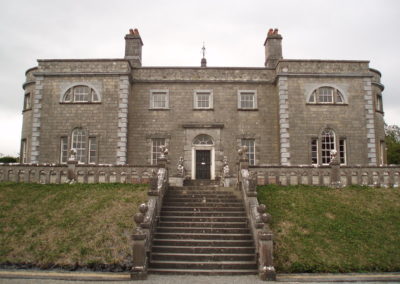 The Athlone to Mullingar Cycleway (also known as Old Rail Trail) is a long-distance cycling and walking trail in County Westmeath, which forms a section of the Dublin-Galway Greenway. It is a 40 kilometres long rail-trail over the disused Athlone-Mullingar rail line beginning in Athlone and ending in Mullingar. A new bridge is planned for Athlone

The Moate-Garrycastle section was officially opened by Taoiseach Enda Kenny in October 2015n September 2015 the Westmeath Independent reported that the greenway could provide a “€15m boost” to the local economy.

The section has been extended up to Ballymahon road (White gates) in December 2016 and will eventually extend into Athlone town.

Plans, by a community development organisation in Kilbeggan, County Westmeath, are underway to connect the Greenway to the Offaly Cycleways at Kilbeggan with a greenway to Tullamore, County Offaly. 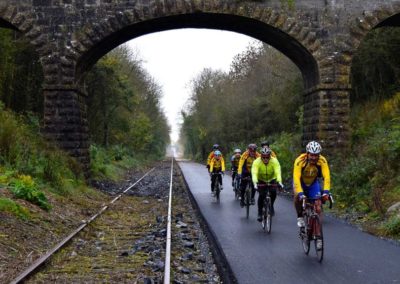